Please find the most recent Winter 2021 Edition – The Tattler

The 2020 Robert Burns Association of North America annual AGM to be held in Atlanta, GA, has been cancelled due to the Coronavirus-19 pandemic.

Please access the link above to access the most recent publication of the Tattler to read more about the conference cancellation and the points/issues that were intended to be brought up, discussed and voted on.

New Publications to be found for club and individual members: 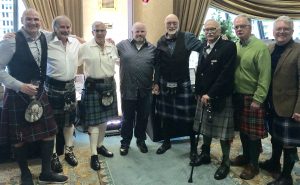 Message from the RBANA President

2019 – Congratulations to Ronnie O’Byrne and his Burns-like prose!!!

Thomas Daffurn of Scotland recently connected with RBANA to let us know that Friars Carse Hotel, an establishment closely to connected to Robert Burns, is currently up for sale in Scotland.

The original ‘Frierskerse’ was established as a friary back in the 13th century, close to today’s ‘Friars Carse’.  The property became home to the Riddell family and named ‘Glenriddell’, with Robert Burns, as a regular houseguest.

Friars Carse has close associations with Burns, too, as it was here, in the Whistle Restaurant, where the famous drinking competition was held with Fergusson of Craigdarroch, the outright winner, and put into verse by Burns.  And it was in this property where Burns would often take his comfort, sleeping at the Burns Hermitage, located in the grounds of Friars Carse.  He even wrote his inscription to then owner of the estate, Robert Riddell,  “To the Memory of Robert Riddell”, on the hermitage window with his diamond stencil.

The stencil is now on display at Ellisland Farm Museum, which is just a short walk from the hermitage along the River Nith.  It is here that Burns wrote many of his most famous poems and songs including Auld Lang Syne and Tam o’Shanter.  Ellisland Farm now provides a wonderful insight into Robert Burn’s life on a farm two hundred years ago.  Guided tours of the farmhouse and museum are available. You can see Rabbie’s original writings, his possessions and stroll along the paths Burns walked beside the river.

The property passed through many hands before becoming home to Dr James Crichton (better known as the Admirable Crichton) in 1809.  Remodelled in 1873, the house was renamed ‘Friars Carse’ in 1895 and established as a hotel in 1938.

Company Secretary, Simon Kelly,  is available to provide additional information about the property and its connection to Burns.
Simon@pofr.co.uk
Telephone number : 44 – 01386 – 882621

RBANA is proud to announce the winner and runner-up contributions to the 2021 Jack Hume Poetry Writing Competition.  The winning poem goes to Jack Fletcher and his poem entitled, “Twenty-Twenty”.

All the poems can be found on the Jack Hume Poetry Contest Page, as well as by following this link to view all of this year’s submissions.

The purpose of the RBANA website is to provide information exchange between affiliated Clubs and individual members of RBANA and provides an access point in North America for those interested in Robert Burns and his works.  RBANA does not have the expertise to assess the value of Burns Books or artifacts. Those with such enquiries should seek professional advice.  RBANA will not make available membership lists or contact details.  RBANA does not review new publications; song albums; etc. or promote these to member Clubs.  RBANA does not promote commercial enterprises, highland dress suppliers, etc.

RBANA is an association dedicated to the preservation and appreciation of the life, works and philosophy of Scotland’s National Bard – Robert Burns, and to promote Scottish culture and heritage in North America.
The genesis for the Association came from a meeting in 1981 of representatives from six Burns Clubs, in Annapolis, Maryland. A committee was formed to further explore their ideas. In 1982 at a meeting in Hamilton, Ontario a constitution was drawn up. The name “The North American Association of Federated Burnsians” was adopted.
At the 2000 Annual General Meeting in London, Ontario the name ” The Robert Burns Association of North America ” (RBANA) was adopted. RBANA is affiliated with the Robert Burns World Federation Limited, in Kilmarnock, Scotland.

Usually taking place in April or May, RBANA Annual Conference and General Meeting is held every year, alternating between Canada and the United States.

The business of the Association is conducted by an Executive Committee, which is elected at the Annual General Meeting for a two year term.  The Executive consists of a President, Vice President, Secretary/Treasurer, Immediate Past President, three Directors from the United States, and three Canadian Directors.
At the 2018 Annual General Meeting in Philadelphia, Ken Montgomery of the Medicine Hat AB Club was acclaimed President, and Henry Cairney of the Calgary AB Burns Club was acclaimed Vice President.

A complete listing of the Executive with their club affiliations is here:

This Website is set up to inform our members and visitors about what is taking place in the world of Burns lovers, both in North America and internationally.
We report on Association and Club activities and also on interesting news items.
The site also provides links to international websites providing access to information about Robert Burns Life, access to his works on-line and resource material for research.
The member clubs are identified and anyone interested in connecting with these can request information.
Individuals are also welcome as members of RBANA, and a membership application form is available on the membership page.
The Association Newsletter “The Tattler” is also available for download.