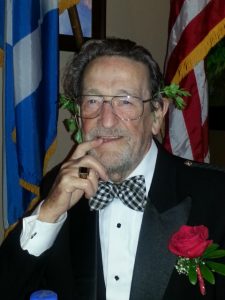 The Jack Hume Heather & Thistle Trophy, is awarded annually for writing poetry in the style of Robert Burns.  Jack Hume, who passed away a year ago, was the founder of the H&T Burns Club and a staunch supporter of RBANA. 2021 is the sixth year of the annual competition for the trophy he presented.

Entries are invited under the following rules and conditions, which also can be accessed as a PDF in the title above: 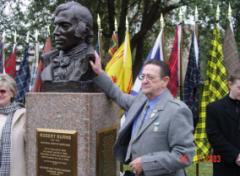 2021 Winning poem and all Runner-Up Submissions

(Reflections on “The Tree of Liberty”, a poem ascribed to Robert Burns)

On winds o’ time, their sails unfurled, Our peoples sought out more, man; Were borne in waves aroun’ the warld – Or crashed upon this shore, man

Now here we stand in this fair land Before this fine auld tree, man: Recall the message which it fanned – The pow’r o’ being free, man

This tree, ance planted in the earth O’ Thirteen Founding States, man, Gave a’ a taste o’ our ain worth As masters o’ our fates, man

She stood the pioneering days When neighbours kept her laws, man, And when our cities were a maze O’ every creed and cause, man